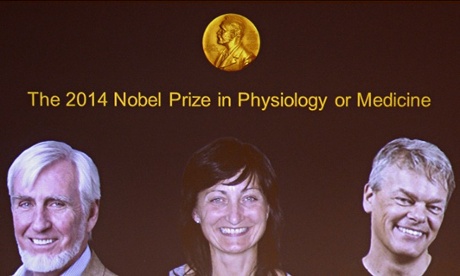 
How do we know where we are? How can we find the way from one p lace to another? And how can we store this information in such a way that we can immediately find the way the next time we trace the same path? This year ́s Nobel Laureates h ave discovered a positioning system, an “inner GPS” in the brain that makes it possible to orient ourselves in space, demonstrating a cellula r basis for higher cognitive f unction. In 1971, John O ́Keefe discovered the first component of this positioning system. He found that a type of nerve cell in an area of the brain called the hippocampus that was always activated when a rat was at a certain place in a room. Other nerve cells were activated when the rat was at other places. O ́Keefe concluded t hat these “place cells” formed a map of the room. More than three decades later, in 2005, May‐Britt and Edvard Moser discovered another key component of the brain’s positioning system. They identified another type of nerve cell, which they called “grid cells”, that generate a coordinate system and allow for precise positioning and pathfinding. Their subsequent research showed h ow place and grid cells make it possible to determine position and to navigate. The discoveries of John O ́Keefe, May‐Britt Moser and Edvard Mos er have solved a problem that has occupied philosophers and scientists for centuries – how does the brain create a map of the space surrounding us and how can we navigat e our way through a complex environment.


How do we experience our environment?
The sense of place and the ability to navigate are fundamental to our existence. The sense of place gives a perception of position in the environment. During navigation, it is interlinked with a sense of distance that is base d on motion and knowledge of previous positions .
Questions about place and navigation have engaged philosophers and scientists for a long time . More than 200 years ago, the German philosopher Immanuel Kant argued that some mental abilities exist as a priori knowledge, independent of experience. He considered the concept of space as an inbuilt principle of the mind, one throu gh which the world is and must be perceived. With the advent of behavioural psychology in the mid‐20 th century, these questions could be addresse d experimentally. When Edward Tolman examined rats moving through labyrinths, he found that they could learn how t o navigate, and proposed that a “cognitive map” formed in the brain allowed them to find their way. But questions still lingered ‐ how would such a map be represented in the brain?

John O’Keefe was born in 1939 in New York City, USA, and holds both American and British citizenships. He received his doctoral degree in physio logical psychology from McGill University, Canada in 1967. After that, he moved to Engl and for postdoctoral training at University College London. He has remained at Unive rsity College and was appointed Professor of Cogniti ve Neuroscience in 1987. John O ́K eefe is currently Director of the Sainsbury Wellcome Centre in Neural Circuits and Behavio ur at University College London.

May ‐ Britt Moser was born in Fosnavåg, Norway in 1963 and is a Norwegian citize n. She studied psychology at the Univers ity of Oslo together with her future husband and co‐ Laureate Edvard Moser. She received her Ph.D. in neurophysiolog y in 1995. She was a postdoctoral fellow at the University of Edinburgh and subseque ntly a visiting scientist at University College London before moving to the Norwegian Univer sity of Science and Technology in Trondheim in 1996. May‐Britt Moser was appointed Professor of Neuroscience in 2000 and is curre ntly Director of the Centre fo r Neural Computation in Trondheim.

Edvard I. Moser was born in born 1962 in Ålesund, Norway and has Norwegian citizenship. He obtained his Ph. D. in neurophysiology from the University of Oslo in 1995. He was a postdoctoral fellow together with his wife and co‐Laur eate May‐Britt Moser, first at the University of Edinburgh and later a visiting scien tist in John O ́Keefe ́s laboratory in London. In 1996 they moved to the Norwegian Unive rsity of Science and Technology in Trondheim, where Edvard Moser became Professor in 1998. He is currently Director of the Kavli I nstitute for Systems Neuroscie nce in Trondheim.